Sky open to sharing PPV rights for Fury vs Joshua

Sky Sports Boxing is open to sharing the PPV rights for the planned Tyson Fury vs Anthony Joshua superfight later this year, according to Adam Smith.

Fury and Joshua are expected to take home around $100million each – record purses for British fighters. The lion’s share of that will come from pay-per-view revenue.

Their fight is expected to smash all domestic box-office records – Joshua’s rematch with Andy Ruiz Jr created a new high with 1.6million buys at £24.99 each in December 2019.

IBF, WBA and WBO king Joshua (24-1) has an exclusive contract with Sky Sports as does his promoter Eddie Hearn and Matchroom, while WBC, Ring magazine and lineal champion Fury (30-0-1) has a matching rights deal with BT Sport Boxing. So everything points towards the two broadcast behemoths sharing the pay-per-view.

There are precedents for this in the past – HBO and Showtime did it notably for Lennox Lewis vs Mike Tyson in 2002 and for Floyd Mayweather Jr vs Manny Pacquiao in 2015.

Smith, Head of Boxing Development for Sky Sports, told Seconds Out: “The promoters are doing their job trying to tie everything up. The deal is pretty much there from what I understand. A two-fight deal.” 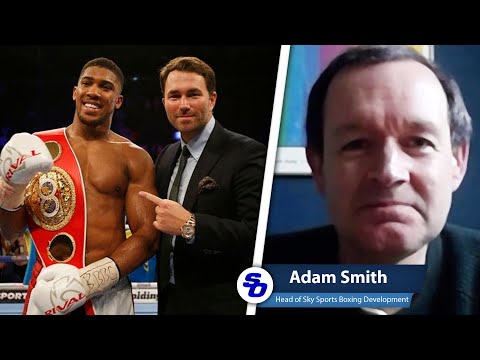 Smith is hopeful that all the belts will be on the line, and that potential blockers like WBO mandatory challenger Oleksandr Usyk will not stop the bout happening.

On the subject of those highly-prized broadcast rights, he said: “We are open to negotiations, to chats. I mean BT are on our platform, they’re on the Sky platform. My old hero or idol Ian Darke commentates on BT, I’m close to Darren Fletcher as well. We talk all the time.

“We’re all friendly rivals, I spoke to Frank (Warren) probably more in lockdown than I did any other promoter – bar Eddie obviously. I spoke to Frank a lot. I think It’s a world event this. I think the most important think is that the fight happens ,and I’m sure then we’ll talk about the broadcasting side.

“There are precedents obviously with HBO and Showtime. We worked with them on Lewis/Tyson, on Mayweather/Pacquiao – so it has been done before and I’m sure it can be done again.”