Skip to content
Fury vs Joshua News Sky Sports or DAZN: Which way next for Eddie Hearn?

Sky Sports or DAZN: Which way next for Eddie Hearn?

Eddie Hearn is riding the crest of a wave right now, but  with success comes tough decisions and the next one for the Matchroom supremo appears to be a straight choice: Sky Sports or DAZN?

Hearn has had a terrific year so far, topped off by emerging as the new promoter of choice for reigning P4P king Saul ‘Canelo’ Alvarez. Hearn has already promoted his bouts with Callum Smith and Avni Yildirim in recent months. And he will again sell the show when Canelo meets Billy Joe Saunders in Arlington, Texas on May 8.

But as he looks ahead to that, and the prospect of Tyson Fury vs Anthony Joshua later this year, Hearn has a major decision to make. And that concerns his UK TV contract. 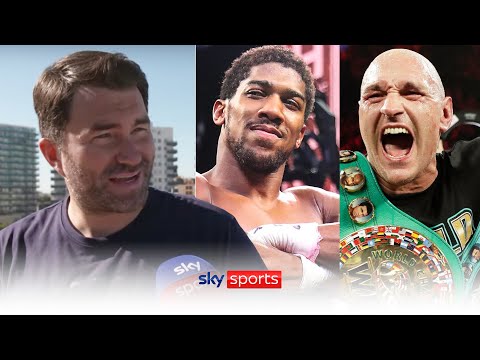 But in the meantime Hearn also signed an eight-year contract with new streaming platform DAZN in 2018 to head up its assault on the United States. A deal worth a reported $1billion.

All good at the time, and even now, with Hearn’s Matchroom shows in the UK appearing on Sky Sports locally and then on DAZN in the rest of the world (the platform had a successful global launch last December).

But Hearn’s contract with Sky expires this summer, and now he faces the biggest poser of all. Does he continue that successful association with Sky? Or does he put all of his chips down on DAZN?

Hearn says there are other bidders, but we expect the final decision to come down to those two players. Both behemoths in different ways, leading to one difficult choice for Eddie.

We look at the factors which might influence his decision.

Hearn’s partnership with Sky Sports has been all-conquering. From filling Wembley for Carl Froch vs George Groves to navigating the peak of a pandemic to deliver Matchroom Fight Camp ‘in his back garden’ last summer. Hearn has just about done it all.

Sky’s enormous brand presence and audience in the UK means Hearn has a huge trump card when it selling his fights. Big as Eddie’s own social media presence is, Sky is a mega player and dwarfs everything else.

A full move to DAZN would see all of that promotional might disappear overnight, and in probably boxing’s biggest market anywhere in the world (yes, bigger than the United States in terms of pure interest).

While DAZN might be enticing in other areas, would they be worth this loss of reach? The alternative though – while safe and likely successful – means a continued balancing act.

It is never trying to keep two different clients 100% happy, especially if they are working in the same area.

Hearn has spoken openly in recent weeks about a desire to take more control of his and Matchroom’s destiny.

It’s noteworthy that the amount of content his internal team is producing for Matchroom’s distribution channels on social media and YouTube. An area he’s clearly keen to grow – he recently announced the launch of Matchroom Media.

The big question is whether that sort of approach works for Sky. Would a broadcaster so steeped in its own production values and storytelling allow somebody else to effectively take the lead?

DAZN however would likely be a much more willing partner here. In a lot of areas the streaming platform takes on supplied feeds and would surely be happy for Hearn to produce more ‘shoulder programming’ to support live fight cards.

Going all in with DAZN, as we’ve already said, would be cleaner for Hearn and Matchroom. One global partner – and it would also fit Hearn’s other stated aim of becoming a platform and entity like UFC one day.

The final point here concerns DAZN’s pure spending power. They could make all the above points moot with a ridiculous offer which leaves Hearn with a very easy decision. Owner Len Blavatnik is one of the UK’s richest men, and the company has been able to survive steep losses so far and even that desperate peak of the pandemic as it builds a global subscriber base.

DAZN appears now to be back on the right track after the worst of COVID-19. Hearn has ‘Canelo’ back in the fold too. Who wouldn’t want to build on that?