Skip to content
Fury vs Joshua News Fury to Hearn: ‘I’m only doing it for you, BBC are w***ers’

Tyson Fury has never been shy of sharing his feelings about the BBC, and he did it again when he joined Eddie Hearn on his podcast for the UK broadcaster this week.

Fury is in Dallas to support Billy Joe Saunders in his huge super-middleweight title unification showdown with P4P king Saul ‘Canelo’ Alvarez on Saturday night. A show promoted by Hearn.

The pair sat down together for Hearn’s ‘No Passion, No Point’ podcast on BBC Sounds, and the uncut footage of their meeting aired on Matchroom Boxing’s YouTube channel.

The lineal heavyweight champion kicked off immediately with: “Let me just say Eddie, I’m only doing this interview for you, ‘cos the BBC are a pack of w***ers and I don’t like ’em. But you’re alright. So far so good.”

That segment appeared to have been removed when an updated version of the video was later posted on the Matchroom channel.

Once the ‘pleasantries’ were out of the way, the inevitable topic of Fury vs Joshua came to the fore, and Tyson yet again voiced his view that it will be an easy night when they finally do get into the ring together.

“I can’t wait to get the big dosser in the ring, give him a good hiding, and prove to the world what a fake he is. And that there’s only one dominant heavyweight champion and he goes by the name of ‘The Gypsy King’.

“Undefeated, indestructible, unbeatable, never will lose a fight in the history of this sport ever. Will retire with the crown. I’m not lucky, I’m blessed.

“But ‘The Gypsy King’ is indestructible, never ever had problems, never had mental health struggles, never had anything.

“Tyson Fury is a flawed character, and the only man who can beat ‘The Gypsy King’ is Tyson Fury. AJ couldn’t lace my boots.” 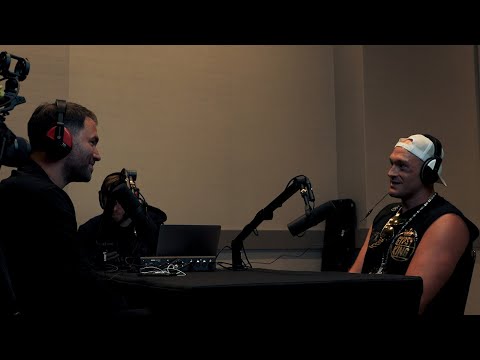 When asked whether the Joshua fight – expected to take place in Saudi Arabia in early August – would be his pinnacle, he responded: “My Everest was when I beat Klitschko on the 28th of November, 2015,  in Dusseldorf.

“That was my Everest. After that it was ‘oh well, it’s f***ing boxing, so what’. It takes a good dance partner to get me juices flowing, and get me turned on with the game again.

Fury, Hearn and that comeback

“When I was fighting Wilder after all that time out. People thought: ‘You know what, this guy can beat Tyson, he’s had three year out the ring nearly, he hasn’t been active, he’s been fat as f***. And he’s coming back after a long layoff. Is it possible to do? Even you (Hearn), you was one of them people.”

Hearn, for his part, admitted he was wrong about Fury and that famous comeback from the brink of boxing oblivion.

“I thought you had absolutely no chance whatsoever. And I watched it on a laptop, and as the rounds went by I thought: ‘He’s gotta get chinned in a minute, what’s going on?’.