Skip to content
Fury vs Joshua News From Floyd to Fury: The past, present and future of PPV

From Floyd to Fury: The past, present and future of PPV

How big a PPV star can Tyson Fury be? Why was Floyd Mayweather Jr the biggest box-office hit in ring history? Mark Taffet is the perfect man to ask as the former head of HBO PPV, and somebody who led the construction of a broadcasting behemoth.

Taffet, now the manager of women’s superstar Claressa Shields, worked with all the greatest pay-per-view fighters of the last quarter century, from the heavyweight halcyon days of Lennox Lewis, Evander Holyfield, Mike Tyson and Riddick Bowe through to Oscar De Le Hoya, to Floyd Mayweather Jr and Manny Pacquiao.

He spoke at length to furyjoshua.com about the past, the present and the future for PPV as well as looking at the potential for fights like Fury vs Wilder 3 and Fury vs Joshua.

When you sat down in the early 90s to put together the model that would serve HBO so well for a quarter of a century, how did you go about it, and how did it evolve?

Taffet: I started at HBO in 1983.  I moved up the ladder in the finance department, and in 1990 did a study of the boxing marketplace for Seth Abraham (then President of HBO Sports).  The study concluded that in order to maintain the leadership position, HBO needed to enter the new market of PPV where the money generated could significantly exceed HBO licence fees for some big fights.  The company approved the business plan, and I was asked to run HBO PPV.  When we did 1.4 million buys and $53 million of PPV revenue for Holyfield-Foreman in our first event in April 1991, PPV was essentially “born”.  The rest is history.

HBO 24/7 and the Floyd Mayweather factor

Mayweather/De La Hoya co-incided with the launch of 24/7, to much praise and excellent results. How did it come about, and did you realise when you came up with that concept exactly what you had with the Mayweathers?

Taffet: First of all, I didn’t come up with the concept for 24/7.  That concept was discussed by a team of outstanding executives including Ross Greenburg, Lou DiBella and me.  The concept was pitched to HBO senior management for some time, and we were told that when we had the “right” matchup with cross-appeal we should launch 24/7.  That opportunity came to fruition with Mayweather vs Gatti.  It was evident immediately that Mayweather popped right off the screen into your living room with that show; we knew we had an unbridled hit and it changed the sport. 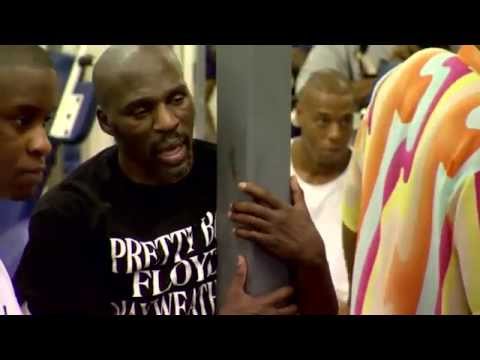 What Floyd Mayweather Jr was able to drive from a revenue perspective against Manny Pacquiao and Conor McGregor (and to a lesser extent against Oscar De La Hoya) was quite incredible. How much of that is down to Floyd himself, and why do you think he was so successful at driving buys?

Taffet: Floyd is not only one of the greatest fighters in history in the ring, he also is one of the best characters outside the ring.  His bravado, presence, unique style, and ability to show his “insides” immediately connects with fans; you simply can’t get enough of him.  He also has as much appeal as someone you want to root against as he does as someone you want to root for, so no audience stone was left unturned.  That is a very very unique combination of attributes.  Floyd made 24/7, and Floyd is the best total package ever for PPV.

Those figures were so far in advance of all previous records, with that in mind do you believe any shift in the media landscape (particularly web and social media) contributed, and if so to what extent?

Taffet: Prior to De La Hoya vs Mayweather, the biggest PPV fights always featured heavyweights.  Oscar and Floyd did 2.5 million buys and exceeded the previous record by 25%!  It also coincided with the worldwide web explosion.  The web allowed us to make more impact quicker than ever before.  Then came the onset of digital and social media, and we took yet another giant leap forward in the ability to make news and impressions quickly and powerfully.  These media developments provided rocket boosters to an already-supercharged event dynamic, and took PPV to new levels.

We see in some ways the torch passed down from a PPV leader perspective from Tyson to De La Hoya, from De La Hoya to Mayweather, and Mayweather to Canelo now. Do you see a potential next PPV star for boxing right now?

Taffet: The one thing about boxing is that there is always a “next”.  I saw that when I worked through 4 generations of fighters during my tenure at HBO – Holyfield/Tyson/Lewis/Bowe/Foreman to De La Hoya/Trinidad/Mosley/Vargas to Mayweather/Pacquiao to Canelo/GGG.  I don’t know who will the “next” at this point, but there will surely be someone who will take and carry that torch after Canelo.

In the UK we are obviously looking forward (hopefully) to Tyson Fury vs Deontay Wilder 3 later this year. The second fight – despite the backing of ESPN and Fox – underperformed compared to the expectations which had been set. How do you see the third fight performing, especially coming out of a pandemic?

Taffet: I think the third fight will outperform the first two.  It takes years for fighters to become PPV stars.  Fury was in effect introduced to the US market through the Wilder fights; he has a larger than life presence both physically and character-wise, and the exposure of the first two fights was very helpful for him.  I believe Fury PPV fights with Wilder or Joshua would be very successful in the US PPV market.

Fury’s contract with ESPN means he has been more active in the US in the last couple of years. Do you think he has made any sort of real dent in that market in terms of popular appeal?

Taffet: As I said, it takes years to become a PPV star.  Fury has made big impressions with his persona and his victories.  His star-power is just beginning to be realised.  In PPV, you go from mid-six-figures to seven-figures overnight….it’s just a matter of which night that will be.

The biggest fight out there for British fight fans is Fury vs Joshua. Do you believe that will happen in 2021 and what do you believe is the biggest obstacle to it happening? What would your brothers say about it (I believe they are your PPV barometer!)?

Taffet: I’m not close enough to the situation and the nuances to know if Fury vs Joshua will happen in 2021, but as a fan I sure hope it does and I would surely be a PPV buyer for that fight.  And yes, my brothers would be buying that fight also!

Inside track: Lewis vs Tyson and De La Hoya/Trinidad 2

In your long tenure at HBO, what was the most satisfying moment or promotion?

Taffet: I was fortunate to have many many special moments in my HBO career.  It is so hard to pick one as the most special.  I think the three moments that resonated most for me were Holyfield vs Foreman 1991 because I knew it changed the sport and landscape forever; Hopkins vs Trinidad 2001 because it happened in NYC immediately in the aftermath of 9/11 and was a very emotional night as the first major sporting event to take place in NYC after the tragedy; and De La Hoya vs Mayweather in 2007 because it took PPV “to the moon” with the 2.5 million buys exceeding all of the big Tyson/Holyfield/Lewis PPV fights to the surprise of everyone (except a few of us within the walls of HBO!).

Is there a particular regret you have from your time at HBO, perhaps a fight that didn’t happen, or one that didn’t perform as you thought it might?

Taffet: In general I don’t believe in regrets in life if you give your all, but my biggest disappointment was not being able to get Bob Arum and Don King to finalise a De La Hoya vs Trinidad rematch after the big, controversial first fight.

Taffet: The Lewis vs Tyson negotiations stand out for me, because it was the first time HBO and Showtime put their interests aside and gave the biggest fight in the sport to the fans who wanted it and the athletes who deserved it.  Lennox Lewis had said to us that he didn’t get to fight Bowe, and didn’t want to leave boxing having fought just one (Holyfield) of his big three opponents (Holyfield, Bowe and Tyson).  That resonated loudly with the senior team at HBO, and was the biggest factor in pushing us to make the deal.

The future of boxing, and PPV

Some very good judges have said recently that COVID-19 co-incided with a natural adjustment that was coming for the sport of boxing. How healthy will the sport be coming out of the pandemic do you think, and what changes happen as a result of it?

Taffet: Boxing has so many challenges coming out of COVID-19.  The economics are vastly different, and may be that way for a while.  The pressures on all but the few promoters with network output deals will be extraordinary.  Talent may have to adjust to new purse levels until tickets can be sold.  The “networks” are all under significant economic pressure which will impact the promoters and fighters.  I expect changes in the landscape as a result, which will create great challenges for some but great opportunities for others – both at the network/platform level and at the promoter/fighter levels.

DAZN has approached boxing with a different model to yours in the United States. Do you think it is possible to succeed without PPV and with the sort of financial outlay they have made?

Taffet: It just may be that there are a few fights a year which are larger than the economic wherewithal of the regular platforms, and thus the need for occasional PPV, but that should be only on a very exceptional basis.  It is also proving difficult to get the “best vs best” fights done on a regular basis to fulfil the needs and desires of fans, which is particularly important when fans have to pay for the events whether on PPV or on a monthly subscription app basis. But all the platforms can be successful if they each understand their economics and each demand and deliver “best vs best” matchups.

It’s 2025, the world has changed and Mark Taffet is now the Boxing Tsar with a mandate to cure boxing’s ills and set it up for a bright future. How does he go about it?

Taffet: In MLB, NFL, NBA and NHL the best must play the best by definition and structure of those leagues.  Boxing MUST find a way to deliver “best vs best” matchups on a regular basis to fulfil fans’ needs and desires or it can’t realise its potential in this new, digital/social world with infinite video to fulfil people’s desires all the time.  Fans will not have patience for “coming soon” – there must be a regular “coming next” mantra and delivery to ensure maximum success.