When Tyson Fury claimed this week that he was looking to tip the scales at 300lbs for his trilogy fight with Deontay Wilder many experts scoffed, but what does his co-promoter Frank Warren think?

Fury (30-0-1) made the claim during that headline-hitting press conference in Los Angeles to confirm the July 24 showdown. He had scaled 256lbs for their first meeting at Staples Center in 2018, and 273 for the Vegas rematch in February 2020.

The bold statement from ‘The Gypsy King’ may just have been more mind games to unsettle Wilder – ‘The Bronze Bomber’ could not cope with his size and aggression in that rematch. Fury would eventually win via seventh-round stoppage.

Warren believes Fury will not be quite that big for the third meeting, and thinks it more likely that he will be in the range he was for the rematch.

“He’s not gonna be complacent, he’s got a very good boxing brain, he knows what he’s got to do to win. He worked out Wilder in the first fight – in my opinion got robbed. In the second fight he showed how much he’d worked him out and did a job on him.” 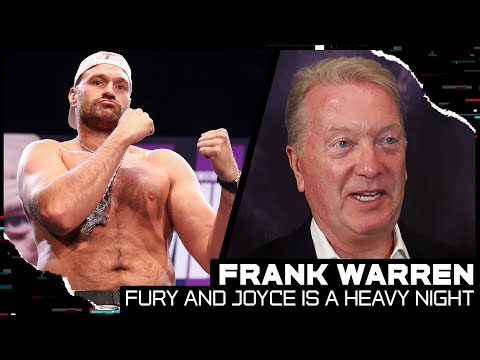 The major talking point coming out of Tuesday’s press conference was the epic staredown between the two men – timed at just under six minutes (5 minutes 46 seconds to be precise). This came after Wilder wore his headphones and refused to answer media questions during the televised portion of the press conference.

Warren believes Fury is – as Tyson himself claims – ‘living rent-free in Wilder’s head’, and that Deontay’s antics were damage limitation.

“The two previous fights, Wilder never won anything with those against Tyson. Every time, Tyson kept doing him verbally, got in his head. I think he just thought: ‘If I don’t say nothing, then he’s not going to be able to jump on it, twist it and turn it to his advantage’, and that’s what he did.

“That’s all great, and we’re gonna see plenty of stuff coming up, is he gonna maintain that in the press conferences and fight week leading into the fight? I’ve got no idea. It doesn’t matter, because on the night, all that matters is what he can bring to the ring.

Fury vs Wilder 3 heads an incredible night of heavyweight action on Saturday July 24. It all kicks off with Joe Joyce vs Carlos Takam in London, before the action moves over the Atlantic to T-Mobile Arena in Las Vegas.

As well as the main event there, the undercard is stacked with three fascinating heavyweight showdowns.