Skip to content
Fury vs Joshua News WATCH: Fury and Wilder face off for SIX MINUTES

WATCH: Fury and Wilder face off for SIX MINUTES

This was the fight before the fight as Deontay Wilder and Tyson Fury stood to face off for SIX MINUTES to kick off the countdown to their trilogy fight next month.

The two heavyweight superstars met at a press conference in Los Angeles on Tuesday to officially confirm their fight at T-Mobile Arena in Las Vegas on Saturday July 24.

A shirtless Fury was his usual colourful self as he aimed carefully chosen verbal shots at Wilder, while Deontay kept his earphones on and refused to take questions from the media.

Once the words were over came the eagerly-awaited first face-off – and it did not disappoint.

Fury and Wilder stared each other down for fully six minutes – an epic confrontation which neither man appeared to want to end. This was high stakes of the mental kind with both seeking a psychological edge ahead of next month. 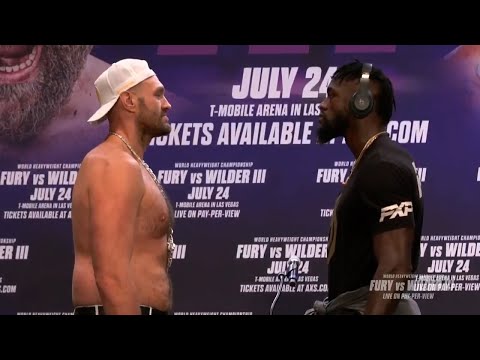 The two men stayed largely silent as their two respective teams jawed at each other, hurling insults back and forth.

Eventually it was Wilder who ended the tense face-off by putting on his sunglasses and walking away. Fury’s team took this as a victory, cheering loudly and shouting “we won”.

Only time will tell if this was another sign that Wilder is mentally damaged by that destruction at the hands of Fury in their second fight in Las Vegas in February 2020.

Fury believes he is still living rent free in Deontay’s head on the back of that one-sided blowout, and confidently predicted another. If this epic face-off was anything to go by, it looks like it’s advantage Tyson as we head for the final countdown to the biggest heavyweight fight of 2021 so far.

Fury will hope that another defeat of Wilder (he is currently a 2/7 favourite) will rekindle that unification showdown with Anthony Joshua later this year. Joshua meanwhile is expected to face Oleksandr Usyk in late September.