Skip to content
Fury vs Joshua News ‘I can’t box, I can only fight’ – Chisora ready for Usyk war

‘I can’t box, I can only fight’ – Chisora ready for Usyk war

Dereck Chisora says he must drag Oleksandr Usyk into a war on October 31 to have a chance of upsetting the odds against the Ukrainian superstar.

The 36-year-old Londoner (32-9) has the chance to get back into the elite heavyweight picture when he takes on the WBO mandatory contender at a venue still to be confirmed. The bout will be a pay-per-view affair on Sky Sports Box Office in the UK and will be aired by streaming platform DAZN in the United States.

Usyk (17-0) is a slick southpaw who dominated the cruiserweight divsion before moving up into boxing’s marquee weight class. He’s a master boxer, one of the best out there today, and Chisora knows that he must take those skills out of the equation come Halloween.

He told BT Sport Boxing: “I can’t box. I can only fight and go to war. I leave boxing to those guys like Usyk and them lot, but I can’t box. I love fighting.”

Chisora’s manager David Haye backed up that belief, saying that his man must impose himself, get in close and maximise the value of his physical advantages (Dereck is likely to be 40-50lbs heavier than his opponent come fight night).

“The last place you need to be against an Olympic gold medallist is at the end of his gloves,” said Haye.

“You need to be stay on his chest, you need to get your feet close to his, you need to rough him up inside, you got to hit him wherever you can hit him.

“He’s not gonna give you a clean shot on his chin so you’re gonna have to punch through his gloves. Hit his arms, elbows, hips, back of the head, kidneys. You gotta get real rough, down and dirty, and ground it out of this guy. Force Usyk – who’s a masterful boxer – to have a fight.

“The moment you have a boxing match with a boxer, you’re gonna come off second best. Drag him into a fight, force Usyk to fight.”

Usyk vs Chisora has already been scheduled and cancelled due to the ongoing COVID-19 pandemic, but the Chisora team have been at pains to make sure their man does not become burned out by the starts and restarts to preparation.

Dereck explained: “When we did the first press conference, I was excited, I was ready to rock and roll.And then the whole situation happened and things went into lockdown. And David and the rest of the team decided that if we were going into lockdown, I was only going to train 45 minutes every day.” 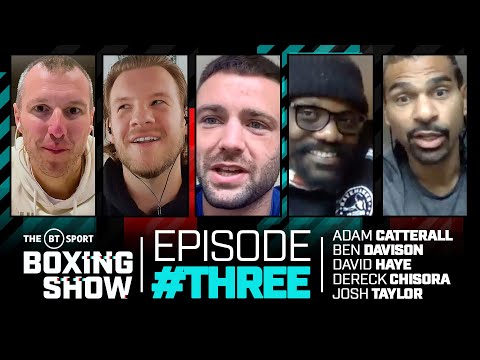 Haye meanwhile believes the stop-start preparation has been a blessing in some ways, claiming: “I’ve seen him in good shape but he hasn’t had the consistent quality sessions like he’s had now. We’ve probably had three mini-camps for this fight. We now know we’re six, seven weeks into this particular training camp and the fight is now happening.

“We fortunately learnt from every single training camp that has been cancelled that this type of training should be done, this type of sparring, let’s take these days off. It’s been like a work in progress over the last year.

“One of the only positives of lockdown is we’ve been able to start and restart again and not allow Dereck’s body to degenerate and to get out of shape.”