Skip to content
Fury vs Joshua News No hate, just respect – Usyk looks ahead to Chisora

No hate, just respect – Usyk looks ahead to Chisora

Oleksandr Usyk says he has no hate for his opponents, only respect, as he looks ahead to that massive showdown with Dereck Chisora on Saturday night (October 31).

The 33-year-old Ukrainian southpaw is the WBO’s mandatory challenger at heavyweight. And victory over ‘Del Boy’ on Halloween would push his claims for a shot at Anthony Joshua’s belt.

Seventeen fighters have so far tried to defeat Usyk as a professional, and 17 have failed. But the former cruiserweight king says he respects all of them, and will have the same sentiment towards Chisora.

The pair meet at London’s SSE Arena in a pay-per-view showdown on Sky Sports Box Office in the UK (£19.95). DAZN meanwhile will air the bout in the United States as well as in Canada, Germany, Japan, Italy, Spain, Brazil, Austria and Switzerland.

Usyk released a video on his YouTube channel talking about his preparations for the big fight.

He said: “He (Chisora) is strong, he will try to hit me hard, try to hurt me. But I don’t think about it all.

“I think most of all about my camp. And how I can fulfil all the tasks my team give me with quality.

“I don’t hate guys before and after the fight. They do difficult work every day. Because I know what it costs.  All I have is respect for them.” 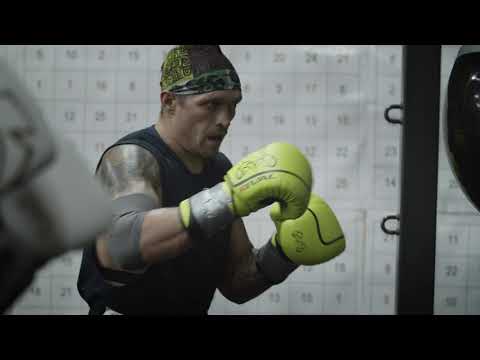 Usyk is a brilliant boxer inside the ring, and clearly a student of psychology outside the ropes. He says there is very definitely a case of mind over matter. If one route doesn’t work, find another.

“There are no secrets. Everything in the ring is very simple,” he said.

“If they tell you it’s impossible, just do it – that’s all! There is a mountain, and you need to climb it. And if you can’t climb, do you know what to do? Go through it, cut a tunnel, or demolish this mountain to hell.”

The Ukrainian of course could therefore be a major blocker to Joshua’s hopes of a mammoth clash with Tyson Fury.