Oleksandr Usyk says he’s ready to “explode” on Saturday night when he meets Dereck Chisora in a massive pay-per-view showdown.

Usyk (17-0) is the mandatory challenger for the WBO heavyweight title held by Anthony Joshua. And a victory over Chisora could set up a showdown with AJ. Ring walks are expected to be between 2200 and 2300 GMT.

The former cruiserweight king says he has waited a long time for this moment, and is ready to do a job on the seasoned veteran Chisora (32-9).

“I’ve been waiting for it for a long time, almost eight months. I’m really happy to be here in the UK, and will be more happy when I enter the ring and hear the bell for the first round,” he said in an interview with Matchroom Boxing.

The build-up to Usyk vs Chisora has been illuminated by the hilarious back and forth between the two fighters on social media. But Usyk says we shouldn’t expect more fun and games this week.

“At this stage I am more locked in myself and I am accumulating everything I want to explode with on Saturday night,” he said.

Usyk giving the fans what they want

When asked about those videos he released to promote the fight, he said: “That’s the build-up for the fight, that’s why I started it. People need to know more about boxing, so my intention was to bring their attention to boxing.

“Some people say that athletes from Ukraine stay silent, that’s not true. I think that we fighters need to build up the fights, but in a clean manner. 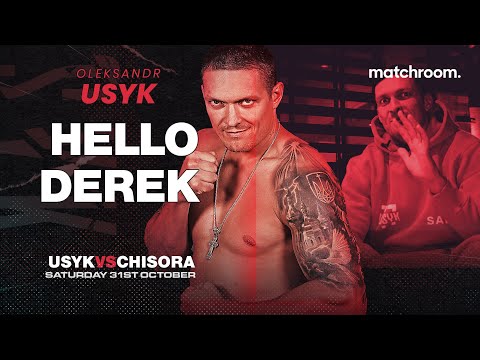 “I also analyse what modern people want to hear. Young people who spend time on the internet. They want to see how we train, how we exchange messages, what kind of exercises we do in our training camp. They get well informed and they are waiting for the fight. It’s all art, the art of boxing.”

Some experts believe Usyk may be found wanting in his first showdown with a big and seasoned heavyweight, but he is unmoved.

“I don’t care much what people say. I know that this guy is a big guy and will try to bring some damage to me,” he said.

Chisora has also promised Usyk the “biggest fright of his life” on Halloween, but again the former cruiserweight king is unimpressed.

He revealed: “I don’t think he is the biggest fright of my life because he doesn’t know my life. I’m not sure myself what I am afraid of.”

Saturday’s bout of course will take behind closed doors at London’s SSE Arena due to COVID-19 restrictions. But Usyk says he doesn’t need a crowd to inspire him.

“I had many fights in the amateurs where there was no-one in the venue except the judges and maybe 10 other people. And I gave 100 percent of myself for the fight.

Saturday’s bout will be screened by Sky Sports Box Office on pay-per-view in the UK (£19.95). DAZN meanwhile will stream the fight in the United States, Canada, Germany, Japan, Italy, Spain, Brazil, Austria and Switzerland.