Eddie Hearn says Fury vs Joshua is ‘a 1966 moment’

Tyson Fury vs Anthony Joshua this June will be a sporting moment big enough to compare with England’s 1966 football World Cup victory, according to Eddie Hearn.

It’s now 55 years since Alf Ramsey’s heroes defeated Germany 4-2 after extra-time at Wembley Stadium, with Geoff Hurst leading the way with a hat-trick.

But Hearn believes the showdown between two British current world heavyweight champions is good enough to match that epic day, and says the whole country will be watching.

It’s expected Sky Sports Box Office and BT Sport Box Office will share the UK rights, and Hearn is confident of a new record for domestic pay-per-view buys. By some margin.

He told IFL TV: “I think it does 2million something buys, UK. F***ing huge isn’ it, how big is it?. It’s bigger than boxing, this fight.

“The whole country is gonna be watching this fight. In fact f*** 2million, 3 million, 4million, 5million – I don’t know. It’s gonna be one where no-one on that night will be doing anything else in this country than watching that fight. 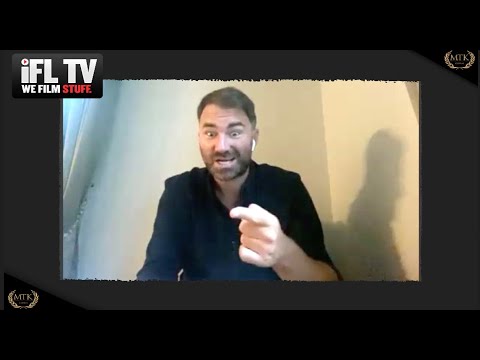 Hearn re-iterated the likelihood of Sky and BT sharing those prized UK rights – Joshua has an exclusive contract with Sky while Fury has a matching rights deal with BT. ESPN and DAZN are the frontrunners for the US rights.

“I think there’s a very good chance – subject to Sky’s approval, I can’t speak for Tyson Fury’s side – a shared broadcast in the UK is definitely an option for that fight,” he explained.

“Of course everybody would love that on their own, but if that’s not possible then I don’t think people would object too much to a shared broadcast.

“In the US, it will depend on are ESPN going to go pay-per-view with this fight? Obviously DAZN have a right to match AJ’s fights in terms of the offers. That’s something I’m discussing with Bob as well.”

Hearn says negotiations continue to progress satisfactorily and expects a deal to be completed by early February.

“We’re in a good place. I I believe we’ll have these contracts finalised in the next couple of weeks. I believe this fight will take place in June.”

Once contracts are signed, Hearn says the next step will be to decide on a venue. As already stated, the UK is highly unlikely due to the ongoing COVID-19 pandemic.

“We’ve had big discussions with Qatar, with Saudi Arabia, with Australia, with Singapore, with America. UK, the chance of getting 100,000 people in the UK in June is very unlikely.

“We get approaches every day. But before we go down that very tiring route and arduous road of finding out what’s real and what’s not real, we wanna make sure we have the deal in place.”

The odds for Fury vs Joshua are as tight as you might expect. Fury currently shades the market at around 4/7, with Joshua around a 6/4 chance.