This article previewed the Tyson Fury vs Deontay Wilder 3 press conference which took place in Los Angeles back in June. You can watch their final Las Vegas press conference ahead of Saturday’s showdown live by clicking here.

Tyson Fury vs Deontay Wilder 3 has been a long time in the making and the final build-up will begin tonight with a press conference in Los Angeles – you can WATCH IT LIVE.

‘The Gypsy King’ and ‘The Bronze Bomber’ had been due to meet for a third time back in 2020, but the bout collapsed after a number of dates proved impossible to finalise.

Fury (30-0-1) it appeared was moving on to face Anthony Joshua for all the marbles instead, until that is Wilder won an arbitration which forced Tyson to give him that trilogy fight. Fury’s WBC, Ring magazine and lineal heavyweight titles will all be on the line.

There is genuine bad blood between the pair now, with Wilder’s many allegations following that defeat by Fury in their Vegas rematch in 2020 clearly angering Fury. Now they are set to finally meet again at the T-Mobile Arena in Las Vegas on Saturday July 24.

The build- up as ever should be explosive, and the body language and dynamic between the pair at this opening presser will be fascinating to behold. 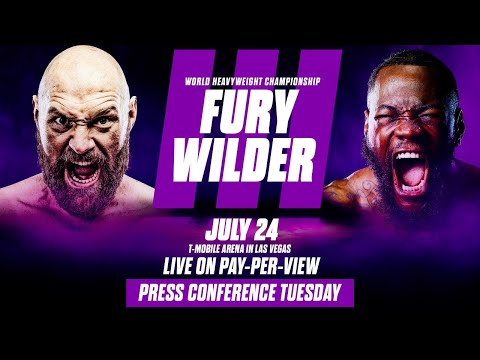 Fury and Wilder have of course met twice before. Their first meeting came at Staples Center in Los Angeles in December 2018, and it ended in a controversial draw. Fury was twice on the deck – including that incredible recovery in the 12th and final round. Many experts though felt he still deserved the decision after an excellent boxing display.

The rematch was not nearly as close as Fury – now 273lbs and full of aggression – was on the offensive right from the first bell. He dominated proceedings throughout until Wilder’s corner threw in the towel during Round 7.

It was a first professional defeat for Wilder (42-1-1) and he is desperate to gain revenge – vowing to “decapitate” ‘The Gypsy King’ in the process.

Fury, a 2/7 betting favourite, knows the stakes are high with the carrot of a showdown with Joshua still right in front of his nose. AJ of course is set to defend his belts against Oleksandr Usyk in September. If both men win, a Fury vs Joshua showdown in December remains a possibility.

The undercard for Fury vs Wilder 3 is also full of heavyweight quality – with not one, not two but three majorly interesting matchups on offer.

Fury vs Wilder 3 will be a pay-per-view affair in the United States with both ESPN and FOX televising.