Joe Joyce vs Michael Wallisch went off pretty much as expected on Saturday night, but the post-fight analysis from David Haye left ‘The Juggernaut’ with plenty to ponder ahead of that huge showdown with Daniel Dubois on October 24.

Former world cruiserweight and heavyweight king Haye – providing commentary on the fight for broadcaster BT Sport – said that while the 34-year-old Joyce beat up Wallisch “like a bongo” en route to a third-round stoppage, he took too many punches in doing so and trying the same thing against the unbeaten and highly-rated Dubois (14-0 with 13 inside) could end in tears.

In a fascinating and detailed lowdown, Haye told BT Sport Boxing: “He got the job done, he let his hands go, he beat the guy up like he was a bongo. I was unhappy with the amount of clean punches he was taking – he took about five or six big concussive hooks that he could have avoided. I know he’s got very good reflexes, he didn’t really show them here tonight.

“I wouldn’t want him to go into the fight with Dubois with the same mindset he had here tonight. He had no consideration for what punches were coming. He leaned backwards a couple of times from some of the right hands, crude right hands from Wallisch, but against Dubois he’s gonna really need to get them feet going.”

Haye was surprised at Joyce’s strategy against Wallisch – having felt the 34-year-old might have used the opportunity to have an in-ring rehearsal for his showdown with ‘Dynamite’ in October.

“I thought he was gonna attack this fight like he would have treated the Dubois fight,” explained Haye.

“You normally use these fights before the big ones as a little rehearsal, a dress rehearsal. He came in here heavier than I’d have liked him to have been, and he just marched him down. That’s good and well against this level of opponent. But at world level, when somebody can take you out with one shot, you have to get the head movement, show some feints, set something up.

“But against Wallisch he could just go out there and boom boom boom. Nobody outside of world level can take that. This is good enough to beat everybody probably up until to the top 10 in the world. But he’s fighting Dubois, and Dubois isn’t one of those guys you can just walk down. He needs to be a bit smarter.

“I know Joyce can box, I’ve seen him box consistently in the gym and in the ring when he fought so many different fighters, he’s used his legs, he’s got great movement, he’s a great athlete. Let’s see some of that stuff.

“So hopefully when he goes back to the gym, he can review the fight and realise the shots he got hit with, are shots he should not be getting hit with, he can then get some confidence going into that big Dubois clash.” 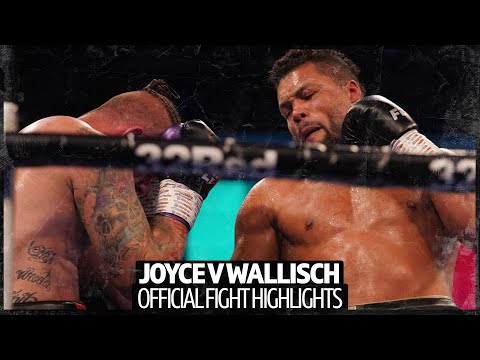 Joyce did not have the tutelage of trainer Ismael Salas for this fight, with the veteran Cuban unable to fly in from Las Vegas because of the COVID-19 pandemic. And as a result Haye didn’t feel Joe looked like the same fighter he had in previous bouts.

“He wasn’t moving like he normally does, he wasn’t avoiding the punches. He didn’t slip, when I say slip I mean coming into the shot and moving, he didn’t do that. That’s something he’s been working on for a long time – he’s worked with Ismael Salas and Salas is about rhythm, about timing, about flow, about movement. I know Salas is coming back into camp soon for this fight. COVID has kept him in Las Vegas.

“He needs to get those legs going, he’s got great movement with his legs and he’s gonna need to use those legs against Dubois to stay out of that danger zone early. If he can get into the second half of the fight then he can start pressing, in my opinion.

“Or, he may just walk him down like that, you never know, but it would be a very risky strategy against a young man who punches so hard.”