A Mini Cooper can never beat a Ferrari – Tyson Fury

Ask Tyson Fury to compare himself and Deontay Wilder ahead of their trilogy fight on October 9 and he will use cars – specifically a Mini Cooper vs a Ferrari.

No prizes for guessing which one ‘The Gypsy King’ believes he is after destroying Wilder in their second fight in Las Vegas in February 2020. Their first fight had ended in a controversial draw in Los Angeles in December 2018.

The pair will finally lock horns for a third time at T-Mobile Arena next month (live on BT Sport Box Office), with Fury, a heavy betting favourite, confident that he will again have the number of ‘The Bronze Bomber’.

Speaking to Queensberry Promotions’ ‘The Lowdown’ on YouTube, he said: “Doesn’t matter what he (Wilder) brings to the table, it’ll never be good enough to beat me, ever. Because however you wanna chop it up, a Mini Cooper can never beat a Ferrari in a race. And that’s the difference in me and Deontay Wilder.” 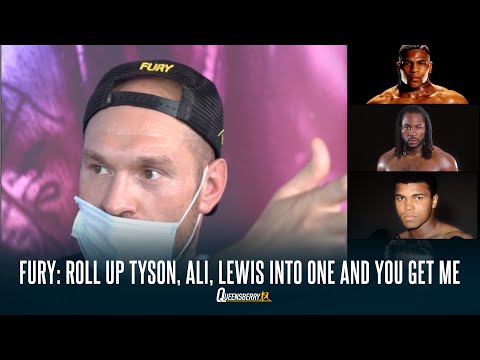 Wilder’s new head trainer Malik Scott says Fury is vulnerable in his fights, a fact with which ‘The Gypsy King’ does not disagree. He adds though that despite that, nobody has been able to close the show and beat him.

“I am a very vulnerable fighter, I’ve been put down in the past on a few occasions. Wilder put me down twice before. Steve Cunningham, a blown-up cruiserweight couldn’t even punch his way out of a paper bag and Neven Pajkic wasn’t a known puncher.

“So it’s not exactly as I’m invincible. I have been known to be vulnerable and look vulnerable but I’m still undefeated after 13 years. So, vulnerable or not, there must be something about me that makes me the best of my era and the best fighter that’s ever lived.”

Tyson Fury on his place in boxing history

Fury talked about the greats of the past, and their attributes, and says he has all of them. Talk about confidence.

“We was only speaking about this today, me and ‘Sugar’ (trainer ‘Sugar Hill’ Steward). You’ve got Muhammad Ali, he had his superior footwork that made him special. You’ve got like Mike Tyson – he had that speed and that power, the turn and twists.

“Lennox Lewis, he had his hulking strength and guts to go forward and aggression. Then you had Wladimir Klitschko, who had all this awkwardness because of his size. Now if you roll all of them up into one, that makes me.”

Not surprisingly given that statement, Fury does not believe there is a heavyweight alive who can beat him right now.

“There’s always a puncher’s chance in the heavyweight division. But as I’ve proved in the past it’s pretty hard to nail me down and keep me there. And that’s why I’ll go down as the best fighter that’s ever ever been.

“Because there’s never been anyone at 6ft 9ins tall who can do everything, coming from every angle. It’s not even possible, I don’t think it’s even humanly ethical that this should be able to work.”