“Where’s me man gone?” was the immediate response from Tyson Fury after that epic six-minute staredown with Deontay Wilder this week.

‘The Gypsy King’ (30-0-1) and ‘The Bronze Bomber’ (42-1-1) came literally face to face at the Los Angeles press conference to promote their trilogy fight on Saturday July 24 at T-Mobile Arena in Las Vegas.

Wilder was silent for the most part, refusing to take media questions, but when the two men engaged in that epic staredown, it appeared both were seeking a mental edge. Fury’s final words to Wilder during those six long minutes were quite simply “you know what’s coming”.

In the end it was Wilder who blinked first, walking away after possibly the longest staredown in boxing history. Leaving Fury once again to criticise his opponent and claim a moral victory. 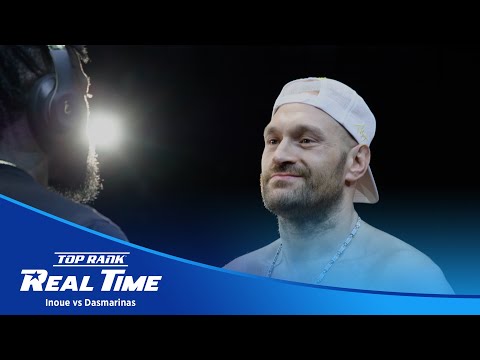 Fury drew his first meeting with Wilder in December 2018, but was utterly dominant in their February 2020 rematch in Las Vegas. Tyson prevailed by seventh-round stoppage that night, and he is predicting an even more one-sided encounter on July 24.

“Wilder is a p***y and I’ve exposed him twice and I’m gonna severely hurt him this time – severely. I can’t be held accountable for what I’m going to do to him because I’ve got a licence to thrill like James Bond.”

Fury will put his WBC, Ring magazine and lineal heavyweight titles on the line on July 24, and is currently a heavy favourite to retain his belts and his unbeaten record.

He knows that if he beats Wilder, and Anthony Joshua beats Oleksandr Usyk in September, the drums will again beat loudly for a huge unification showdown between the two British stars.

Joshua vs Usyk is expected to take place on Saturday September 25 at Tottenham Hotspur Stadium in London, and will be for AJ’s IBF, WBA and WBO titles.