Fury vs Joshua may not happen until 2022 – Carl Froch

Tyson Fury vs Anthony Joshua could easily be delayed until 2022 as COVID-19 and boxing’s politics throw a spanner into the undisputed works, according to Carl Froch.

The former world super-middleweight king is delighted Dillian Whyte is set to finally get his crack at the World Boxing Council (WBC) heavyweight title. But he also admits it complicates further the route to the showdown that the whole of boxing wants to see. Fury and Joshua have agreed in principle the financial structure of a two-fight deal.

Whyte has been waiting as the WBC’s mandatory contender now for more 1000 days, and is finally expected to get his chance against the winner of Tyson Fury vs Deontay Wilder 3 (expected at the moment to take place on December 19).

Froch, speaking to BT Sport’s Darren Fletcher on his Froch On Boxing podcast, said: “He’s a top fighter Whyte, I rate him highly as you know, I think he’s a danger to any of the heavyweights. I know he’s already lost to AJ but he had AJ rocked and then AJ put a great finish together and got him out of there. But Whyte’s come on, he’s improved a lot since then, he’s had some good wins. 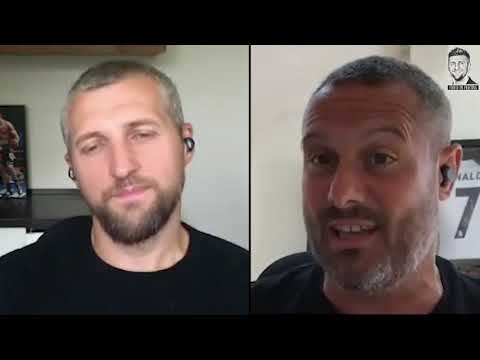 “I’m a boxing fan in general but I do want to see Dillian Whyte given his chance – I feel for him because the situation I was in when I was waiting to fight Joe Calzaghe for the WBC title, waiting around, hanging around, waiting for your time and then you get told ‘right, now you’re not fighting’.

“So to get the news after he’s appealed that he’s now fighting for the WBC title when we find out who wins in Fury and Wilder, that’s great news and I’m happy for him.

“But it does put a bit of a spanner in the works because we all have to be honest and admit that everybody wants to see, the fight the world wants to see is Tyson Fury/Anthony Joshua – that’s the big one. But Dillian Whyte’s there and he poses a danger to all of them, and how far away realistically is the AJ/Fury fight? It might not be 2021, it might be 2022 by the time we get through this lockdown crisis and then this mandatory defence that he’s got.

“And let’s not forget that Anthony Joshua has got to come through Kubrat Pulev in whatever conditions that may be. We talked about the crowds earlier, if he’s not up for that fight, that’s a fight that could go wrong.”

Boxing’s politics are legendary in their complexity and ability to throw up scenarios that few could have predicted, and Froch believes anything is possible in terms of the way the Fury vs Joshua plays out.

He explained: “So good news for Dillian Whyte – I’m happy for him. Bit of a spanner in the works for the Matchroom camp and Eddie Hearn in terms of ‘yep, we’ve got AJ/Fury straight in there’. But there are a couple of caveats to that – Fury could just vacate the WBC, they could maybe pay Dillian Whyte some step-aside money, ‘you stay out of the way, you keep quiet for now, you fight the winner of AJ/Fury’.

“There’s all these different scenarios. Boxing, let’s be honest it’s the vestage remains of the Wild West. Anything can happen in boxing.”

Whyte (27-1) of course has a dangerous assignment of his own as he bids to keep up the pressure to get that WBC title shot – putting his interim champion status on the line against former WBA king Alexander Povetkin (35-2-1) at Hearn’s Matchroom Fight Camp on Saturday August 22 (live on Sky Sports Box Office).

Meanwhile, as well as having IBF mandatory Pulev lined up for later this year, Joshua himself may have another engagement to deal with before he can thank about Fury. This thanks to the World Boxing Organization (WBO) saying they expect him to meet their mandatory contender – former cruiserweight king Oleksandr Usyk (17-o) – if he gets past the veteran Bulgarian.