David Haye says a Tyson Fury vs Anthony Joshua megafight has to happen and that the universe is sucking Britain’s two heavyweight big guns together.

Haye – himself a former world heavyweight champion – also believes the experts writing off Joshua’s chances based on that one shock loss to Andy Ruiz Jr in June 2019 could be proved very premature.

Haye – speaking to Kugan Cassius of IFL TV – gave his verdict on that ‘chance’ meeting Fury and Joshua had in Marbella just over a week ago, and looked ahead to what might happen if and when they finally step inside the ropes together.

“The universe is trying to bring them together,” he said.

“God has come down and said ‘Right okay you’re in Marbella, let’s bring you together’. Because they work better with each other – the world needs them together. God brought them together to like get eye to eye: ‘yeah this is real, we’re going to do this, you beat Pulev, and I’ll beat Wilder again and we’re gonna get it on’.”

While Fury and Joshua have agreed in principle the financial structure of a two-fight deal, they both have interim bouts to take care of first – AJ against IBF mandatory contender Kubrat Pulev (28-1) and Fury a trilogy fight with Deontay Wilder (42-1-1).

But Haye believes if they come through those bouts – as he expects them to – the big one British fight fans are dreaming of will be up next.

He explained: “Seeing them together, AJ looked like he ain’t been sitting around eating pies, he’s been working out – he looked in fantastic shape. Fury obviously riding super high from his Wilder victory, I’m sure he’s going into that third fight with supreme confidence.

“And I’ve got no questions that Anthony Joshua will completely and utterly annihilate Pulev – I don’t think he’s gonna have any problems taking him out at all. And I think he’ll look real spectacular – he wants to make a statement, really wants to make a statement for this fight, because people have jumped off the Anthony Joshua bandwagon a little bit you know after that single loss he’s had (against Ruiz Jr).” 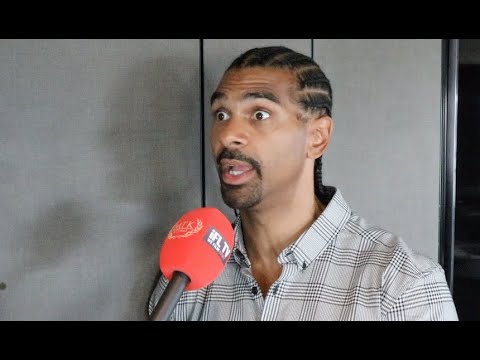 Haye knows exactly what it feels like to be a highly-touted unbeaten fighter who has his bubble burst by a shock first career defeat, and what it takes to come back from that. He sees that resolve and improvement in Joshua.

“I know what that feels like – in my 11th fight I got my arse kicked by Carl Thompson – who I should have beat on paper,” said Haye.

“That’s what Anthony Joshua did (in the rematch with Ruiz Jr in December 19), he went out there and put on a boxing masterclass, a boxing clinic, literally had a punch-perfect 12 rounds. Who thought he could stay on his toes for 12 rounds? I didn’t – if you say could AJ stay on his toes, stay sharp from Round 1 to Round 12 and just have a shutout – probably not, I’ve never seen it before, but now I’ve seen it, he’s got more in the locker.

“I think people forget what Anthony Joshua brings to the table. Olympic gold medal, not been boxing that long, And every fight he’s improving, so the fight’s a lot closer than a lot of experts say. ‘Oh Fury’s gonna beat him’ – I’m like are you sure? I know they sparred a few years ago and I know AJ did very well in that spar when he was a real novice.

“So it’s an interesting fight that everybody has to see – this COVID thing has just delayed it a little bit. But it’s gonna happen – I told you, the universe is sucking them together, bringing the forces of this game of life we’re in – ‘you two gotta fight each other, let’s make it happen’.

“I really think after this fight, they’re gonna fight each other. Im feeling it – the fact that I’ve seen them together in the same place at the same time. It has to happen.”