The fallout from the collapse of Tyson Fury vs Anthony Joshua continues to rumble on more than a week after the planned all-British superfight fell apart, and now Frank Warren has hit back at Eddie Hearn.

Boxing’s politics claimed yet another high-profile victim when Deontay Wilder won an arbitration ruling to force a third fight with Fury. At the same time he scuppered the grand plan for Fury and Joshua to meet for all the heavyweight marbles in Saudi Arabia on August 14.

Now instead, Fury will face Wilder in a trilogy fight on July 24 in Las Vegas, while Joshua is likely to defend his belts against Oleksandr Usyk in late August. It is hoped Fury vs Joshua can be rekindled in December should both men come out on top.

Earlier this week Hearn blasted the Fury team over the way the whole scenario has unfolded – claiming they never wanted the fight and had the opportunity to terminate the Wilder contract. He said he felt like “a one-man army” trying to get the deal over the line.

Warren, who co-promotes Fury along with Top Rank and Bob Arum, has now hit back during a lengthy interview for ‘The Lockdown’ on his Queensberry Promotions YouTube channel.

In it Warren says among other things:

Frank Warren on Fury vs Joshua

Here are some of the key segments from the interview:

On Fury vs Joshua negotiations

“Just at the start of the New Year around January, all parties concerned in the fight – promoters on both sides, fighters and their management companies, signed a contract as to how the negotiations would take place.

“In that agreement there was a clause that made it very clear there was an arbitration situation going on as far as Tyson was concerned. So everyone was aware of it, and we were awaiting the outcome of that.

“There was another clause in there which was confidentiality that we would make announcements together, so that we were all on the same page. And that was basically the way forward. 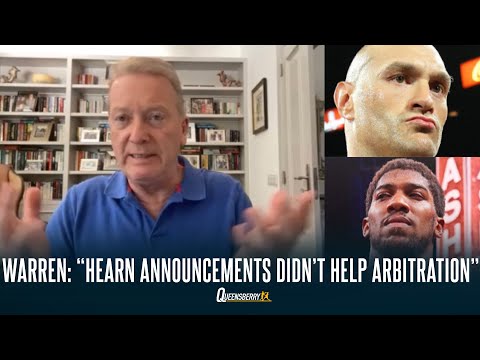 “What happened was within a very short space of time Eddie Hearn or Matchroom – they breached that agreement by making announcements. As you’ve seen it and everybody’s seen it every week there was announcements, announcement about announcement, the fight’s done and so forth, it’s gonna happen. And that was totally untrue – the fight wasn’t done, it wasn’t signed.

“And every time I did an interview I just said the truth, I think back in November, somebody sent me a copy of article where I actually said there is an arbitration to be dealt with. Until you’ve got the result you haven’t got the result. And that’s where we were.”

On Fury vs Wilder arbitration

“I wasn’t his (Fury’s) US promoter. That was handled by Bob (Arum) in the States. They were very bullish and their lawyers were bullish that they would win the arbitration, or there would be some accommodation between the two parties.

“Maybe the arbitrator would let the fight move forward and there would be some financial remuneration for Deontay Wilder.”

On Usyk and the WBO

“In the meantime, unbeknown to us but now known to us, Usyk – who is the mandatory challenger for the WBO title that AJ owns – had written to the WBO and written to all parties concerned saying that they will be suing if that fight (Fury vs Joshua) goes ahead.

“So even if we’d won the arbitration, we’d be in a situation now over Usyk and AJ. There’d be an action and they’d be looking for injunctions to stop it. So that wasn’t dealt with, and nor was it brought to anybody’s attention by the way. So pot, kettle with Hearn.”

On Wilder and step-aside money

“Shelly Finkel and Al Haymon – who work with Deontay Wilder – and Deontay Wilder himself, are not interested in remuneration, they said we want the fight.

“It probably didn’t hurt with all the disparaging remarks over the last couple of years that Eddie Hearn has made about Shelly Finkel – the names he’s called him and whatever – I’m sure he weren’t looking to do him a favour.”

“It’s very logical that the biggest money fight out there for both boxers is fighting each other. That means more money for them, more money for everybody involved – promoters, managers etc.

“So why would we want to be going backwards to fight Deontay Wilder? Why would we be pushing for that? We’re not.

“It’s the same with Usyk. No way AJ wants to be fighting Usyk. I’m sure he’d prefer to fight against Tyson.”

On Hearn and announcements

“It was the most ridiculous scenario, I was constantly being asked ‘why am I down on it, why am I not announcing it’.

“All you’re doing is running around like a headless chicken.”

On Fury being happy to fight Wilder

“He is happy and I’ll tell you why he’s happy. He’s been out the ring since February 2020. He was gonna fight on a couple of occasions and the dates were pushed back. We all know, it’s well documented, he wants to be in the ring, he’s a fighting man and wants to fight.

“He actually said a couple of weeks that had he not had some comfort that the fight was gonna take place in Saudi – which he got at that time – that he was gonna move on any way and fight Wilder because all these announcements that Hearn was making every day, that become very frustrating for him.

“So he is happy now – I know he’d much rather be fighting AJ, but you know what, gotta get on with it Get rid of this obligation. He’s gotta win the fight, still a dangerous fight. He’s a dangerous fighter Wilder, he can punch which we all know. He’s had Tyson on the floor twice in their first encounter, and he’s got a new trainer.

On the future for Fury vs Joshua

“What’s gonna happen now, these two guys are gonna fight unless AJ decides he vacates his title and then Usyk will fight Joe Joyce for the vacant title. I don’t know whether he’s gonna do that or not.

“Then after that they’ll fight. They’ve got one fight left with Anthony Joshua, Matchroom. They’ve gone to DAZN. I don’t know what AJ is doing – there’s talk of him staying at Sky. Whether he does or not, who knows, that’s his decision.

“Who knows, we get these two fights out of the way and providing both the guys win, we could be trying to get this fight in December. And if there is no deal with Matchroom with AJ, then we’ll be dealing direct with AJ and there will be no Matchroom involvement and it will be done properly. Where we can make announcements at the correct time when the contracts are signed for such a fight of this magnitude.”