Fury vs Joshua: Frank Warren hits back at AJ claims

Frank Warren has hit back at Anthony Joshua’s claims that Tyson Fury has not “been in the deep end long enough”, saying his man has been “at the bottom of the ocean”.

Joshua (23-1) spoke last week for the first time since the announcement on June 10 that there is a financial agreement in place for a two-fight deal with Fury (30-0-1), with the first fight potentially taking place in the summer of 2021.

He told Sky Sports: “I take him as a serious challenger, of course. But resume? It’s taken him a long time to grow. His fight with Wladimir Klitschko (in 2015) was his first real challenge and he overcame it, but it took him eight years to build his experience and confidence. Then he had two years out and fought Deontay Wilder. He hasn’t been in the deep end for long enough to show me that he can swim there for a long time.”

Warren, whose Queensberry Promotions co-promotes Fury along with Bob Arum’s Top Rank, rubbished that assertion though and compared Fury’s amazing recovery in his first fight against Deontay Wilder to AJ’s capitulation against Andy Ruiz Jr at Madison Square Garden.

He told Seconds Out: “Deep waters? I can’t think of any deeper waters he could have been in than getting hit and going on the floor twice against the biggest-punching heavyweight in the last 30 years. And certainly in that last round – I’m his biggest believer and fan – and I thought he was gone. That wasn’t deep waters, he was at the bottom of the ocean. He was there in that trench at the bottom of the ocean. He came out of that, got up and not only got up but come back and won the round.

“The only comparison I can make with that is probably with AJ and Ruiz in New York. He went over and it was all over. As for the rest of his career, you can’t compare saying that he’s not been in enough trouble to come back and so forth. Other than that fight, I can’t think of troubles he’s been in in his career. There is a reason for that – because he’s such a good fighter and such a good boxer. And that’s what he is. 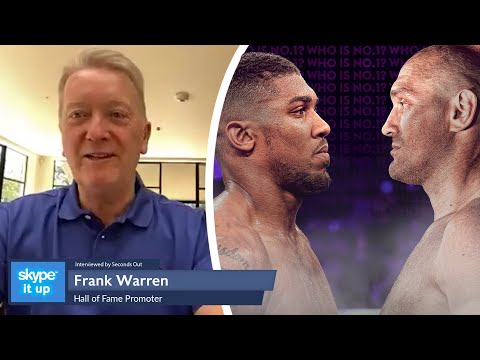 Before Fury can meet Joshua of course, he has the small matter of a trilogy fight against Wilder (42-1-1). The bout appears likely to take place at the brand-new Allegiant Stadium (home of the NFL’s Las Vegas Raiders) on Saturday December 19. That is of course if the COVID-19 pandemic subsides enough to allow a live gate.

Warren explained: “That’s (December 19) still the case – I’m speaking I think with Bob Arum this evening or tomorrow. That will be up for discussion. I spoke to Tyson on the phone for quite a while the day before yesterday. He wants to fight. I’m sure Deontay Wilder and all these guys do. They’re all sitting around twiddling their things at the moment trying to keep focused and keep fit and well.

“He (Fury) wants to fight, but obviously a fight of that magnitude, it does need to generate a live gate or a big site fee to take it there.”